My Childhood in India in the 60s 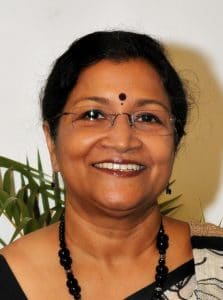 I am a retired Chemistry teacher and an artist by passion. I work across mediums; painting with coffee is my current favourite. I have exhibited art works in various parts of UK, US, India and in Singapore. When I sit in front of an empty canvas, I feel like a child running aimlessly in a vast field, it helps me to start my dialogue with the canvas. I have lived in India, Singapore, UK and US. My husband and I now divide our time between our home in Kolkatta, our children’s homes in the US and travelling.

India, known as land of diversity and mystery, has the largest proportion of young population in the world; with more than half of India’s population being under the age of 25 years. India is also rapidly changing and modernising.

Traditionally the family structure in India has been a ‘joint family’ structure, with even the extended first families living and in some cases working together, typically in a family business. Growing up with a huge rich-poor divide, crazy traffic, animals on street, frequent power cuts, protests and shut downs, children have the opportunity to pick up hands-on lessons in resilience and jugaad from early age. India is a land of many languages, faiths, cultures and cuisines.

Typically, a child growing up in even a small town will be at least bilingual, but more often understand more languages.

Modern urban Indian families are moving toward nuclear family structure, with both parents working. There is largely no childcare support from government or employers, leaving parents (mothers, in particular), grandparents and nannies to take up childcare responsibilities.

Growing up with cousins, running barefoot in sprawling garden of my grandparent’s house, climbing trees to pluck mangoes, guava, lychee, is what comes to my mind when I think of my childhood. All cousins put together, we were 10 kids in the house. We played a large variety of  games mostly outdoors, in our backyard. We learnt to swim in the big pond in our backyard, holding on to a float made from the trunk of banana tree.

It may sound like a story to today’s children growing up in high rise buildings of modern India, but that was a way of life back when I was a child in the 50s. My brother and I lived in the city with our parents, but we literally grew up in this, our grandparent’s house on the outskirts. Our house was like today’s mini residential complex, with a huge garden, a big pond and a lot of kids and playmates; each related to another. The house had a balcony surrounding and open courtyard that transformed into a stage, where we staged shows, celebrated family festivals. The balcony witnessed major bhai dooj celebration during Diwali. All the brothers (across generations) sat on the ground one after the other – and their sisters queued up for the bhai dooj ritual. The grand celebration culminated in an even grander feast together.

My grandfather loved to fish at the pond in the afternoons. I often sat for hours alongside him quietly, not making any noise. I must be 7-8 years old then. I think the seeds of patience and perseverance were sown thus.

During summer vacation, we had to stay indoors the whole afternoon, to avoid the sweltering sun and summer heat. The room used to be dark with all the wooden doors and windows shut. We read books in those dark rooms, thanks to a small shutter that beamed sunlight on our books. My most memorable part of this summer experience was to listening to stories of faraway, imaginary worlds from my grandma, lying next to her. Grandma was a great storyteller, she was editor of a magazine and author of stories for children, she had translated English Fairy Tales in Bengali. Grandma was also a lot of fun. She played this game with her grandchildren in which tickled us and asked us not to laugh. I was pretty good at that but my brother would laugh even at the thought of tickling.

As kids we fought a lot but also quickly patched up. If we were cross with someone we would simply say aadi aadi aadi (katti), which meant ‘I’m not talking to you anymore’ in our kid language. If both agree at some point to talk, we couldn’t do so until we said bhab bhab (batti) to each other. Fun times those. I recently met a childhood friend after 40 years, and we still talked about our aadi aadi aadi times.

Childhood was not all play and fun. Discipline, obedience and sincerity was expected of a child.

To be respectful towards elders, to be honest and truthful, not be wasteful, to control one’s greed, temptations and anger and to exercise self-control were expected from ‘well brought up’ children.

I fondly remember the ritual of sitting with my cousins on the floor around my grandfather’s desk, solving simple math problems for one hour every day. My grandfather had a huge study, filled with bookshelves and a writing desk, where he spent most of his time. He would cut sheets of waste paper, clip them together on his desk for us to do maths on the blank side.

‘Spare the rod and spoil the child’ was a saying that most mothers followed. At home or in schools, a tool used in disciplining a child, was the fear of being punished. Extended family members played an important role. Any elder member of the family had the right to discipline a younger child. I can’t remember anyone complaining about this. The love and affection of the elders –  aunts, uncles, grandparents – on all other occasions more than compensated the scolding for a slack in our behaviour.

Traditional Indian parenting was never a ‘one to one’ approach. In most households, habits and customs were handed down from the eldest to the youngest. Arguing with the elders was a NO NO. Gender bias existed and girls were taught to be more docile and homely.

During my childhood, caste system was prevalent in India and I was aware of it. In my family though, the elders taught us not to make any discrimination based on caste, looks or social status.

Growing up in India also meant having friends and neighbours from various faiths and cultures. We grew up participating in customs and rituals of different communities. These celebrations and festivals  may superficially seem different in different communities, but they all had an underlying message of peace and harmony. Since the main purpose was to enjoy as a community, people belonging to different faith or culture were welcome. Above all it encouraged the spirit of sharing.

My family followed traditions but without any prejudice and bias. My maternal grandmother, a Brahmin by birth,  was a follower  of the Brahmo

faith. As such, I never saw any Puja being performed by my grandmother but festivals that included traditional art and craft, were observed. Alpona was one essential art used as part of decoration, which all of us had to learn. It used to be the medium of expression of not only a woman’s sense of aesthetics but also her wishes and desires. Such floor art, known by different names and with variations in motifs and styles, are practiced all over India. India’s tradition consisting of its original culture and a variety of cultures brought by invaders has made it extremely rich. It is fascinating to see so much of art and craft still prevailing in folk form.

I think, if parents come from different cultural backgrounds and practice their own customs and traditions, the children will not only learn to appreciate every culture, but also enjoy family bonding and develop different arts and skills from such cultural celebrations.

I have two children, one son and a daughter and now a granddaughter who is 12. From my own experience, I believe that the best gift parents and grandparents can give children today is spending quality time with them. That is how a family truly bonds and significant values and traditions are passed on, while raising the child.

My favourites, with family

Top three things to do

Books to read/ Movies to watch